Friday I had an adventure with a chemical spray applicator in our protected wetland Slough. Here’s a couple of shot of egrets feeding today, and there were egrets closer than this to him as he was starting to spray: 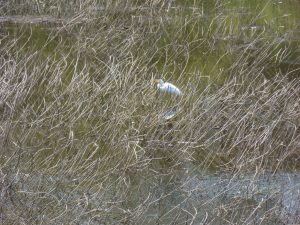 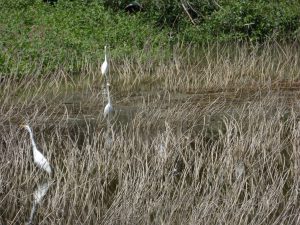 The idea that anyone could think to use chemicals near an active waterway like this, with exquisite wildlife like this rearing their young nearby, was so outrageous I could not imagine what he thought he was doing. Turns out that Wetlands Watch [!] has an agreement with the City authorities to do a long-term native plant restoration, and this was supposedly because there was no other way to eliminate the invasive blackberry vines.

My protective instincts surged up, and I spent an hour on the phone with the Project Director and the Deputy Director of Public Works for the City, and got the project suspended for now. I have many ideas for alternative blackberry elimination strategies, and I’m going to submit one of them as a Make for the final week of the #CLMOOC, since it blends so well with the themes of Connected Learning and Making and Doing.

This site uses Akismet to reduce spam. Learn how your comment data is processed.